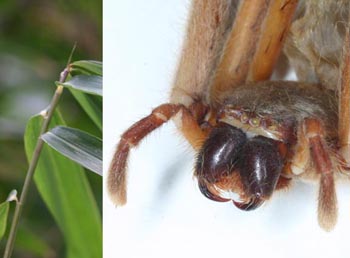 Only few individuals of this unique Huntsman spider species were recorded in bamboo stalks (internodes). These unusual habitas are for a long time one main focus in the reserach institute Senckenberg in Frankfurt. So far rather small spiders were sampled. The new species exhibits a body length of about 2 cm and has a leg span of more than 10 cm. Representatives of this species are raptorial animals, which ambush at night for prey and rest in their bamboo retreat during day-time. With a donation of 3.000 Euro it should be investigated in a cooperational project in Malysia, whether the species lives exclusively in bamboo stalks and thus, its fate is linked with that of the plant, and whether its existence is threatened by human influence in the Malay jungle.